Haunted Opera Slots Game Based On the Original Musical

The Haunted Opera is based on the successful musical show The Phantom of the Opera, and provides the player with all the drama and the beautiful music of the stage show original. Symbols are based on the musical, with the Mask, Sheet Music, the young Soprano, Mirror, Rose, and the Phantom himself. There are also the standard playing card symbols, from nine through to the Ace.

Over the reels hangs a huge chandelier, and red curtains hang at the sides, like a stage setting. The well known music plays during the spins on Haunted Opera, and the organ plays when winning combinations are hit. This slots game has twenty pay lines and five reels, and features a progressive jackpot.

Plenty of Bonuses and Free Spins

Real Time Gaming gives the player an opportunity to join in the dramatic happenings of the original show with this slots game. Haunted Opera has a wide betting range so it can be played by players who are interested in either low or high stakes. To start playing, just press the Spin button.

The Wild symbol in the Haunted Opera is the Phantom’s Mask. It will substitute for all other symbols except the Scatter, which in this case is the Letter. The Mask acts as a two times multiplier when one or more of the symbols appear in a winning combination. When the Mask appears in a winning combination during the free spins bonus round, it will act as six times multiplier. The Scatter, the Letter, if it appears twice or three times, or four or five times in the reels, will pay out a multiplier of one, or three times, or ten times or even one hundred times the player’s total bet. 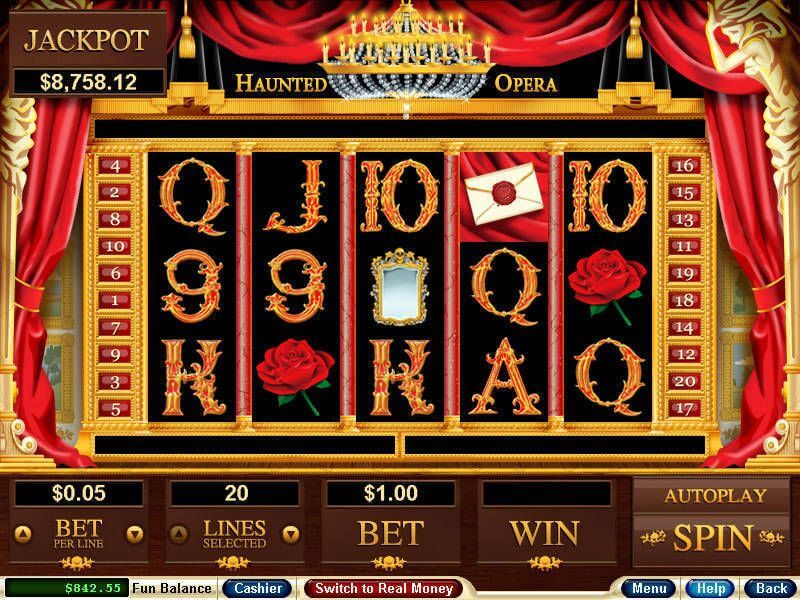 The highest paying symbol in the Haunted Opera is the Sheet Music symbol. Five of this symbol on a selected pay line will reward the player with the top fixed jackpot of 5000 coins. When the player hits a winning combination which includes both four symbols of the Sheet Music as well as the Mask symbol, the win will be doubled, up to 10,000 coins. The young Soprano symbol is the second most valuable symbol, and will pay up to 1000 coins, or more if combined with a Mask symbol.

If the player hits on a Letter Scatter on reel 1 at the same time as he finds a Mask symbol on reel 5, he will win five free spins with a three times multiplier. During the free spins feature, the Phantom may appear on each reel, which will mean a reward to three additional free spins. This bonus round cannot be reactivated.

The Haunted Opera has a progressive jackpot, which is immensely profitable. This jackpot can only be awarded randomly, which means it can work on any spin made in this slots game. Wins on different pay lines are combined and they are also multiplied by the wager that was placed on each active line. Scatter wins are added to whatever the player has won on the pay lines. Only the highest win per line will be paid out. Players are also able to use an Auto Play button when playing this slot at online casino Dubai.

To anyone familiar with the Phantom of the Opera, the Haunted Opera by Real Time Gaming will probably be instantly popular.