Dr Frantic’s Lab Of Loot. This is a rather peculiar sounding title from developers IGT. The name Dr Frantic’s Lab Of Loot definitely paints an interesting image, and the setup going on these reels fills in any of the blanks. Colourful to a fault, the graphics in this slot are impressive and create this deranged doctor’s lab on the reels quite nicely. Whatever crazy experiments this nutty physician has got cooking is bound to end in chaos, but amidst this chaos perhaps there is some jackpots to be won.

The make up of the real money slots aside, this is a 5 reel game with 20 pay lines and enough betting options to accommodate many a player and their preferences. These settings are set out alongside the reels in an easy to navigate manner. The bonuses attached to Dr Frantic’s Lab Of Loot slot game include a Wild, a Scatter bonus that triggers layers of bonus games and a respin feature that occurs after each win.

The theme of this slot game from IGT is effectively a comical take on a mad scientist and his activities from within his crazy laboratory. Where the loot comes in is left to the players imagination, but with the colourful and zany experiments going on on these reels there definitely might be some marketing potential. Either way this theme dies its job visually, providing many different objects and scenarios to setup on screen.

The symbols in Dr Frantic’s Lab Of Loot are of the type one would almost expect to find within the confines of a mad scientist’s lab. On the reels there are radioactive signs, test tubes, a power lever, some floating brains and Dr. Frantic himself. There are also the playing card symbols Ace down to 9, each in a different brightly displayed colour. These all lend to the comical style as well as the theme. 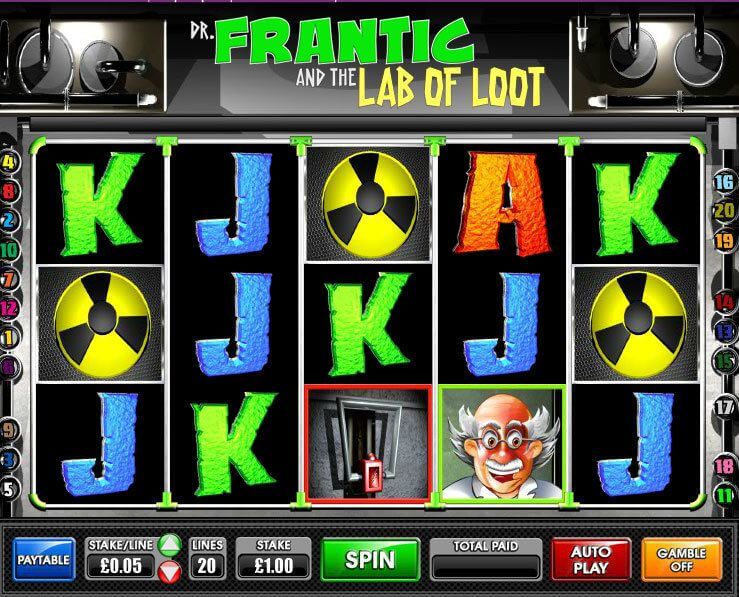 The first bonus feature to take note of is the Wild symbol, which can substitute for other symbols, sans the Scatter symbol, to form winning combinations where necessary. This is the radioactive sign, and so this time only, they mean a good thing.

The chain reaction bonus features happens after every winning spin, those symbols involved in the win are then locked in place and the remaining symbols spin again. This keeps happening until no new combinations are formed. This can also understandably lead to some impressive wins.

The Scatter bonus is the power lever, and that is certainly what it does. Land 6 or more, a feat made more possible through the chain reaction bonus feature, and the Lab of Loot bonus game in Dr Frantic’s Lab Of Loot is triggered. Here the player pulls levers to light up a TV screen and reveal a prize. Should the screen show a monster’s head however the Power Up bonus triggers. Here players must try and stop a power gauge in a particular position. Land on a monster’s head in this game too and progress to the Money Monster Bonus. Here players watch a monster jolted alive by a lightning bolt to reveal a prize and the prizes can get pretty big with this final bonus game.