Frankenstein™ was released in 2011 by Net Entertainment and is a five reel online video slot game with twenty pay lines and multiple bonus features. Licensed by Universal Studios, this online slot game is based on the well-known classic tale about a crazy professor, Dr Frankenstein™ and his monster. Net Entertainment have created this online slot game to be compatible with various mobile operating systems and it is playable in free mode.

The graphics portray a dark and ominous setting to showcase the atmosphere of the crazy doctor’s laboratory in an ancient castle. The background soundtrack offers an appropriate composition that fits the theme. The symbols on the Frankenstein™ reels include the crazy professor himself; his monster; an assistant; a brain and the standard nine through ace high value playing card icons as well as the special wilds; scatters and multiplier symbols.

The twenty pay lines are adjustable and have a variety of betting options available to choose from. There are five bet levels which are the coins placed on each pay line. The coin values can be set at denominations of 0.01; 0.02; 0.05; 0.10; 0.20 and 0.50. The maximum of five coins can be placed on each and every pay line automatically by clicking on the max bet button.

The green spin button will start the game and spin the reels but it may also be used as a stop button in order to speed up game play and not have to wait for the reels to finish spinning on their own. An auto play feature is also available in the Frankenstein™ game. This allows the reels to spin with the same bet in play, consecutively for a predetermined number of times and can be set to stop at various instances throughout the game. 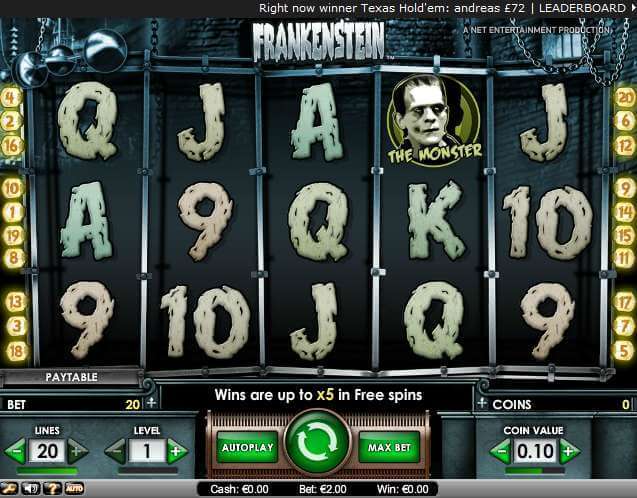 The burning mill symbols are the Frankenstein™ online slot scatter symbols. Three of these appearing on the reels will trigger the free spins bonus round feature. At first ten free spins are awarded but landing two or more scatters during a free spin will result in five or more free spins being awarded.

A multiplier symbol appears on the fifth reel during this feature and every time the multiplier appears, it increases the free spin multiplier by one up to the maximum multiplier of 5x is reached. The fire wild is guaranteed to appear on every free spin and will substitute for all of the regular paying symbols and not the scatter or multiplier symbols.